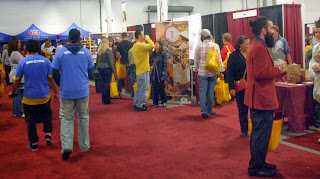 Our weekend adventure included an excursion to the Coffee and Tea Festival in Oaks, PA.  Typically held in NYC, this was the inaugural event for the Philadelphia area.  With over 40 exhibitors gathered in the Convention Center for this two day expo, the opportunity to sample a wide variety of coffee and tea, honey, donuts, tea infused wine, and liquor flavored cakes was abundant. 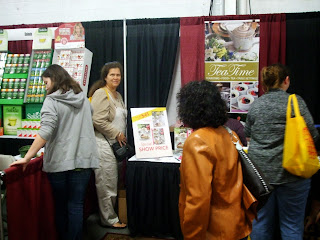 Tea Time Magazine was represented here as well as Tea, A Magazine.  We would highly recommend both of these magazines for advancing your tea education.  They both feature information about the world of tea from two very different angles. 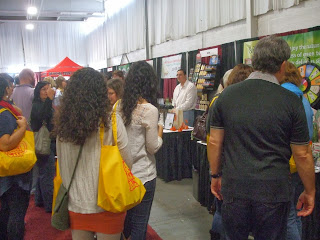 The bright yellow goodie bags were distributed upon arrival.  Assorted tea and coffee samples were already in the bag, and more samples were added to it as you passed from booth to booth.

In addition to the display floor, there were specialty tea tastings and tea related seminars that you could attend during the day.  The next festival will be in the NYC area for the 9th Annual Coffee and Tea Festival to be held March 22 - 23, 2014.  They boast well over 60 exhibitors at this event.  If you plan on attending, don't delay in reserving your tickets as it sells out quickly!
at 7:30 AM

Sounds like a fun time, and I sure wish I could have been there!

Oh I am happy you attended this Festival and enjoyed it. I have heard of it, but to far to come. I am wondering who was at the Tea Time booth, I did enjoy that booth and a chat with the people there when they were in Seattle last month.