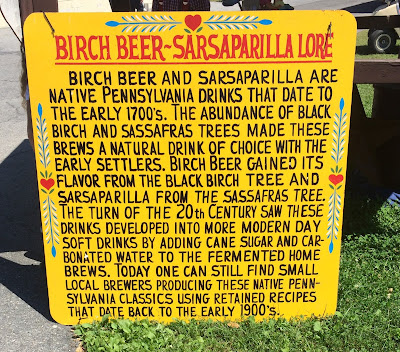 Each year at the Kutztown Folk Festival the Birch Beer, Root Beer, Sarsaparilla Sodas are always popular. Back in the day the roots were distilled and the beverage did have a small percent of alcohol in it. There are a large number of roots used to make the sodas: Birch Bark, Sassafras, Sarsaparilla, Pipsissewa, Wintergreen,  Licorice, Dandelion Root, Burdock Root and many others. Spices are also used such as ginger, star anise, and cinnamon. 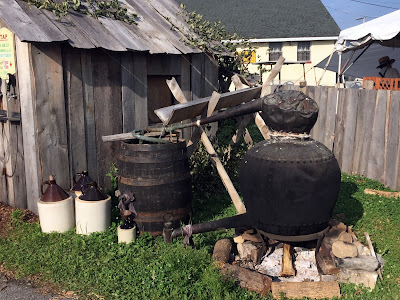 We hope to see you at the festival this year! It runs from Saturday, June 30th through Sunday, July 8, 2018. Look for Susanna at the 'Herb Garden' area. She'll be sipping sarsaparilla soda and vending herbs, teas, soaps, and fragrant oils.
at 10:00 AM No comments: 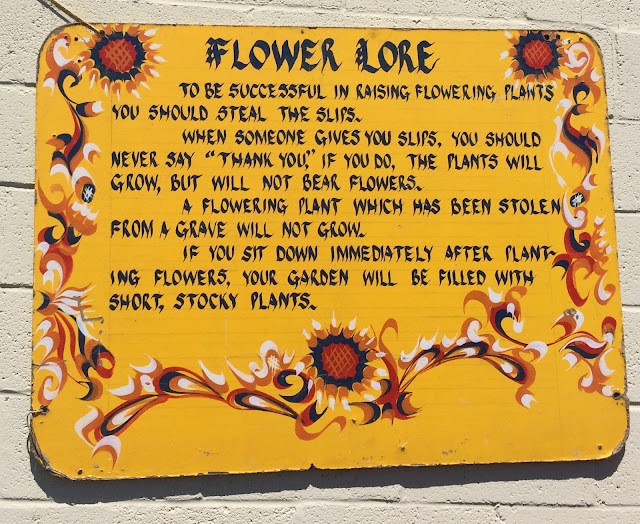 This colorful placard is posted at the Kutztown Folk Festival. This annual event is held the first week in July. (June 30 - July 8, 2018)  It runs for 10 days and features artisans and crafters of PA German heritage. We organize the herb garden for the event and have a booth as well. Not saying "Thank You" for a plant is a big deal around here as they won't grow or flower.  Do you do that as well?
at 9:54 AM 3 comments:

Email ThisBlogThis!Share to TwitterShare to FacebookShare to Pinterest
Labels: Whimsy 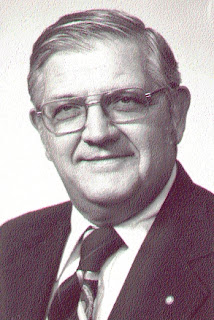 The Mayor's Magic Mustard Mix is one of the popular products to grace the shelves at The Rosemary House. It's a blend of 23 (!) herbs that you add to regular, inexpensive, salad style prepared mustard to create a unique flavor combination for your next bar-b-q, hot dog or as a dipping sauce for pretzels. It is also yummy on glazed ham. The packet of herbs includes recipes for Mustard Butter, Potato Salad and much more.

Over the years, mom created specialty blends that honored family members. Obviously, this one was created in honor of dear ol' Dad, Byron Reppert, Mayor of Mechanicsburg from 1978-1982. The artwork depicts his political soapbox, the gavel he used during meetings, and shows him blending a batch of mayor's mustard mix in a Reppert crock.
at 2:50 PM 2 comments: 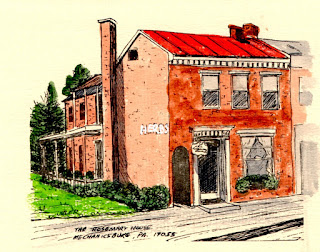 1968 – The doors opened with just one room of sparse inventory displayed on metal shelving purchased from the Sears and Roebuck Catalog.

1970 – Our goal was to add one product to the shelves monthly.  We introduced the Mint Mold candy molds in the shop and at the Hershey Dutch Days craft show.  Our herbal products and mint molds proved so popular Bertha Reppert went home and stayed up all night to type and mimeograph our first mail order catalog.


1976 – Bertha Reppert publishes her first book, A Heritage of Herbs. Her bi-centennial project, this book features native herbs.  Our best selling Roastmary achieves fame in a feature article in the Patriot News.


1985 – Susanna Reppert takes over as manager of The Rosemary House


1986 – Herbs with Confidence is printed


1993 – We begin our “Herbal Affair” event which quickly becomes our Fairy Festival.  We had 30 attendees and we were excited!


2005- The Rosemary House receives a face lift replacing all the original metal shelving and peg board.


2011 – Byron Reppert, the behind the scenes support man passes.

Email ThisBlogThis!Share to TwitterShare to FacebookShare to Pinterest
Labels: Flashback 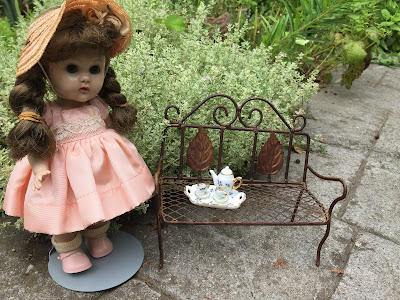 Email ThisBlogThis!Share to TwitterShare to FacebookShare to Pinterest
Labels: Whimsy 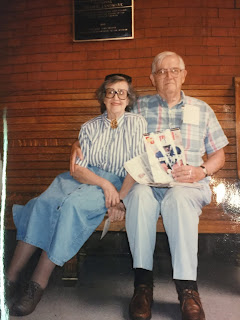 As Rosemary House celebrates their 50th Anniversary this year, we would be remiss in not honoring dear old dad, Byron L. Reppert. Our father was such an important part of The Rosemary House. From the very beginning, he was responsible for the 'book work'. He would sit at his desk and complete all the necessary forms and information to keep the government happy. He's also the handyman that laid the original brickwork in the gardens behind the shop, creating a little cottage garden where mom would hold her garden talks. He was mom's mode of transportation as she never learned to drive. Whatever lecture she gave, he was there, tending shop in the back of the lecture hall. He loved to meet and greet people, and could always find a connection to continue the conversation.
Always in attendance at special events held at the shop, he was also an important part of the tea room. This pair formed the foundation that is The Rosemary House and Sweet Remembrances. 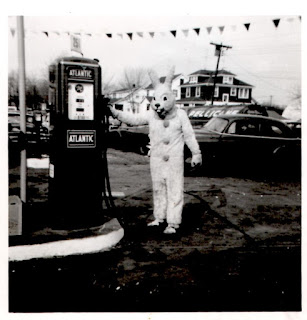 And he wore many other hats, too! errr, costumes!

While residing in NJ, and working as a sales representative for Atlantic Richfield, here he was captured in this photo helping one of his filling station clients with an Easter promotion in 1958. 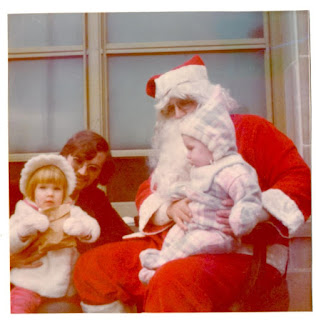 And, after moving to Mechanicsburg, his community responsibilities included serving on the Borough Council, and he was elected Mayor in the mid '70s. He also enjoyed playing Santa, arriving on a firetruck to the enthusiastic smiles of the towns littlest people. This photo was taken with his son-in-law Phil and his adorable grandchildren, Jessica and Jacob.

If you have a fond memory of Byron, please share it on our Rosemary House Guest Book page! 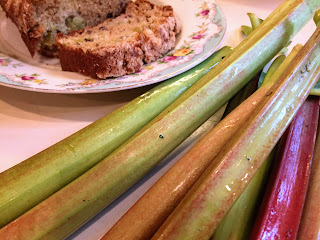 Rhubarb has been in abundance in the veggie box we receive weekly from Spiral Path Farm, our certified organic local farm that offers membership in their Community Supported Agriculture (CSA) endeavor. Not really experienced with working with rhubarb, it has offered a new adventure in the kitchen. I found a recipe for Rhubarb Nut Bread in my well worn and tattered (so tattered it no longer has a cover) Penn Cumberland Garden Club A Bountiful Collection Cookbook. No longer in print, it features recipes, crafts, and gardening tips from members of the club.
Rhubarb Nut Bread 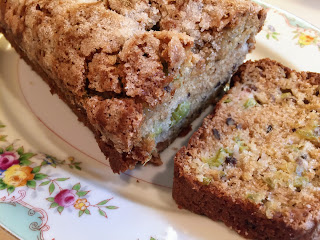 Grease and flour two 8 x 4 x 3 inch loaf pans. Set aside. Preheat oven to 325 degrees. In a large mixing bowl, combine brown sugar, oil and egg. In a small measuring cup, combine buttermilk, soda, salt and vanilla. Add the milk mixture to the sugar mixture alternately with the flour, beating well after each addition. Gently fold in the diced rhubarb and pecans. Divide batter into two loaf pans. Mix the sugar with the melted butter. Sprinkle mixture over the loaves. Bake for 55 minutes, or until a cake tester inserted in the center comes out clean. Cool on wire rack.

This bread was very easy to mix together, and produces a moist and flavorful bread. Yummy!
at 2:23 PM 3 comments:

Email ThisBlogThis!Share to TwitterShare to FacebookShare to Pinterest
Labels: Culinary Delights, In the Kitchen, Recipe

The Queen's Tea - A Royal Celebration 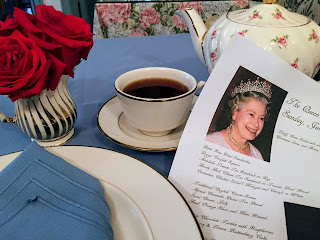 An annual celebration in Sweet Remembrances is the Queen's Tea, typically held the first Sunday in June where we gather to celebrate the Queen's birthday at a festive afternoon tea. Matching china, colorful fragrant roses, and a menu that prominently features the queen quietly announces the courses to be served. 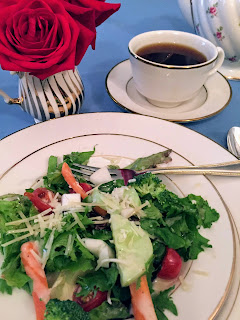 After toasting the queen with an Elderflower Cordial and Champagne Spritzer, the first course, a mixed veggie salad with a creamy honey balsamic vinaigrette was served. 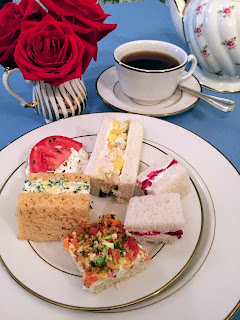 For the scone course, we served the Traditional English Cream Scone alongside a slice of Apricot Coriander Pecan Tea Bread with fresh fruit. 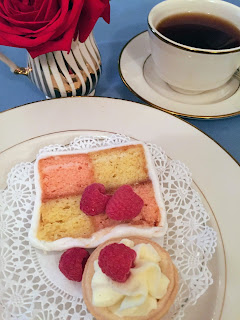 Dessert featured a Raspberry& Lemon Battenburg Cake and a White Chocolate Tartlet with Raspberries. Special thanks to TeaTime Magazine for providing the recipe and detailed instructions to make this impressive cake. They share the recipe here if you are inspired! 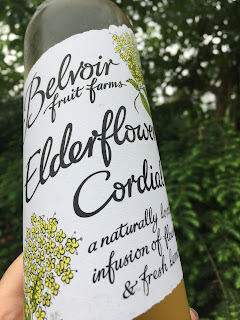 Special thanks to Nancy, aka Lemon Verbena Lady, for her gracious hostess gift of this beautiful bottle of Belvoir fruit farms Elderflower Cordial. Imported from England, this cordial is a naturally lovely infusion of flowers and fresh lemon, prepared with fresh elderflowers, real lemon juice and sugar. We recently celebrated our Queen's Tea, where we mixed the cordial with champagne and happily toasted the Queen. The fresh flavor of this cordial blended perfectly with the champagne. If you have an Aldi's near you, we have heard that it is available there. Otherwise, Amazon is also a source. They have a variety of tempting flavors including an elderflower and rose combination that simply sounds like summer tastes! 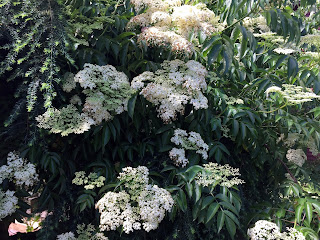 And if you're creative and have access to an elderberry bush, friend Marilyn, at Delights of the Heart, shared her experience making her own elderflower cordial. Check out her blog post!
at 3:22 PM 2 comments:

Busy Front Desk - Then and Now

The 50th Anniversary celebrations and remembrances continue!
Here's a peek at the front desk of The Rosemary House over the years. Be sure to visit our Guest Book on the Rosemary House website and share your thoughts!
We enjoy reading your memories and anecdotes.  http://www.therosemaryhouse.com/contact-us/extras/guest-book/