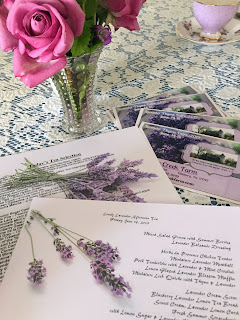 Sweet Remembrances hosted a Lovely Lavender Tea to coincide with a local lavender festival. Attendees were encouraged to stroll the lavender festival in Dillsburg, PA in the morning, and then head to nearby Mechanicsburg, PA to savor a host of lavender delights. A refreshing Lavender Mint Punch was offered in addition to our regular tea menu. Various hot teas featuring lavender were included in the tea list from Lavender Earl Grey, to Lavender Black Tea, to Fig and Lavender. 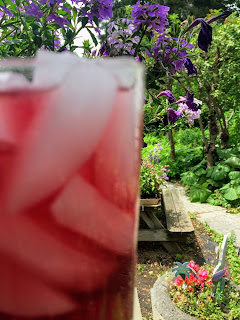 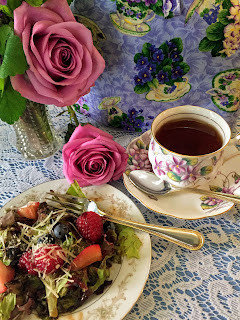 The tea began with a Salad of Mixed Greens and Summer Berries, topped with Parmesan cheese and dressed with a Lavender Balsamic Vinaigrette. 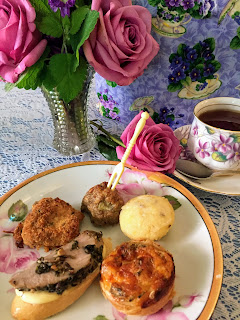 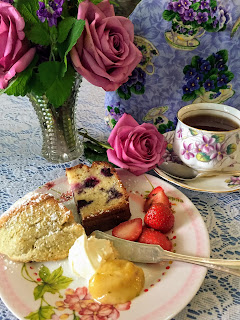 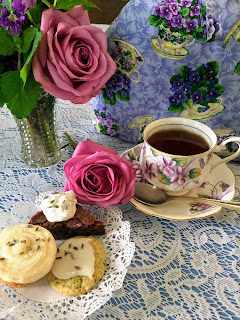 The sweet perfumed nature of lavender flowers blend perfectly with desserts. Our trio of sweet lavender treats included a Lavender Mint Cookie, Chocolate Lavender Brownie, and a honey frosted Lavender Honey Cupcake.
Many of the recipes were seleted from the Lavender Cookbook by Sharon Shipley. A few of the recipes were obtained at the Pennsylvania Lavender Festival that was held at the Willow Pond Farm in Fairfield, PA near Gettysburg. Alas, this festival is no longer held, but many of their recipes graced our table at this event. In addition, a file folder full of lavender recipes gathered over the years, clipped from magazine and newspaper articles rounded out the selection today.
at 8:00 AM

I love lavender! Everything looks & sounds so good!

This all sounds so very delicious! I would love it all.

Your tea menus continue to amaze me. This looks lovely and sounds delicious.

I just love how you constantly try to have teas that support local businesses and events. I imagine your fellow merchants absolutely adore you! (Was looking at a map just this morning and trying to figure out how to *make* Pennsylvania be on my way to Wisconsin sometime. Still calculating, ha!)