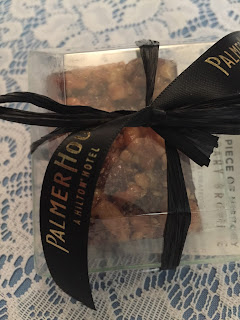 The Palmer House in downtown Chicago is famed for their legendary brownie! From their website: "The first reference to the 'brownie' in America appears in the Sears Roebuck Catalog published in Chicago in 1898. Specifically at the direction of Bertha Palmer to be served at the Columbian Exposition World Fair in 1893, the brownie was created at the Palmer House Kitchen in the late 19th century. The recipe is well over a century old, and is the exact same one used for the brownie served in the Palmer House Hilton today! It remains one of the hotel's most popular confections." 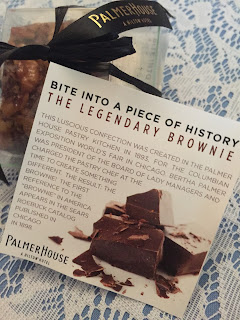 So, of course we purchased several of these brownies as our souvenir, and shared them with the family once we returned home. They are packaged in a clear plastic box, and tucked underneath is the history of the brownie and on the other side is the now famous recipe. This pretty little gift package is tied with a black ribbon. They have them available for purchase in the Lockwood Restaurant.

Follow this link to find the recipe for the brownie..

They are yummy! Rich chocolate, lots of eggs, very little flour, nuts and a special glaze of apricot preserves all combine to make a tasty little morsel.
at 8:30 AM

Email ThisBlogThis!Share to TwitterShare to FacebookShare to Pinterest
Labels: Out and About, Recipe

Oh my! They sound delicious and rich! Never thought of a glaze with apricot preserves, but yummmm!