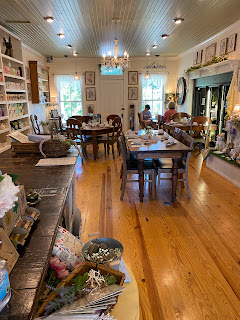 A journey south last week included a stop at the Draper Tea Garden in Draper, VA for afternoon tea located within Thee Draper Village. We had the opportunity for a little shopping at the unique shops before our scheduled tea time. The tea room has a large open space with several tables, and tucked off to the side is a much smaller private room with one table. We opted to be seated in the small room. 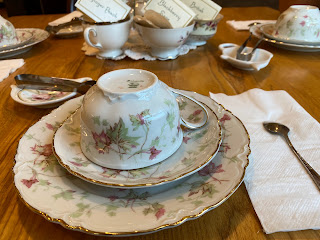 The tables are set with pretty matching china. In the center of the table is the tea selection for the day. Tea cups held three varieties of tea bags; ginger peach, blueberry sage, and English breakfast. Our hostess offered a tea pot full of hot water, and we were able to select and brew our preferred tea. More hot water was available upon request. 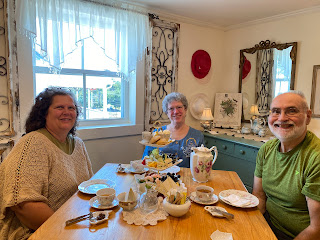 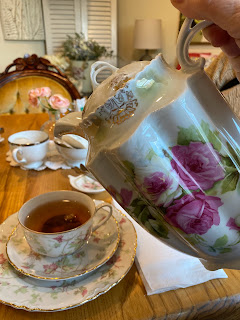 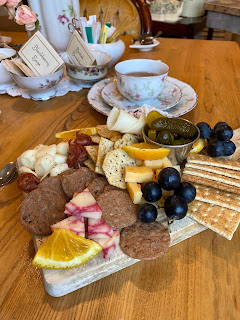 We opted for their 'High Tea' service which they label as a more substantial meal. We were served a large charcuterie board that included a selection of assorted cheeses, fruits, crackers, and relishes. It was a fun and different way to start our tea. Many of the treats on the charcuterie board are available in the gift shops in the complex. We enjoyed a mango cheese that was sweet with the first bite and ended with a little hint of zippiness. 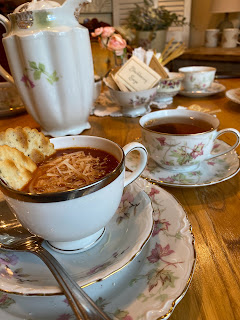 Soup was up next, and it was a thick tomato parmesan soup garnished with a few crackers and cheerfully served in a tea cup. 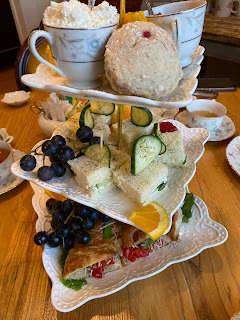 After we finished dessert, the three tiered tray was placed in the center of the table. It held a host of sandwiches; from cucumber to pimiento cheese, to a veggie croissant along with fruit garnishes. In addition, there were vanilla scones on the top tier with clotted cream and seasonal jelly. 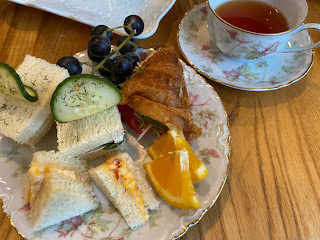 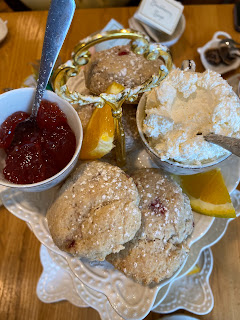 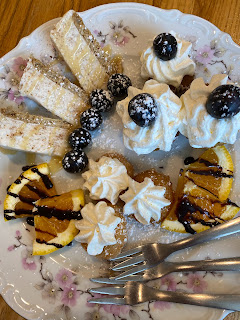 A separate plate was served later, and that held the desserts including shortbread, and an assortment of little cakes laden with cream. The oranges had a chocolate drizzle garnish. And, as if that wasn't enough, a chocolate trifle (cake and whipped cream, with chocolate syrup) served in a petite tea cup was the grand finale. 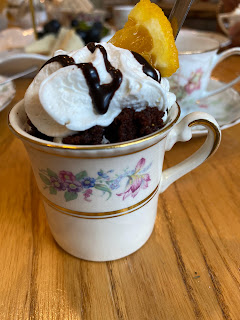 This was the first tea room stop scheduled for our summer vacation. We had three distinct tea room experiences during this trip. Nashville was our ultimate destination with plans to attend the International Handbell Symposium. The symposium is held every two years, and the location bounces around the world. This year, Nashville, and in two years, Japan. Angelica journeyed down a week earlier with the handbell ringers of the First United Methodist Church to attend the weeklong symposium and prepare for the final concert of the event.
at 4:46 PM

Looks like a fabulous tea and a lovely shop!

Their food looks fabulous! How delightful that you could visit.

What fun to include teatime with your adventure to the handbell gathering. This teatime really looks quite wonderful.