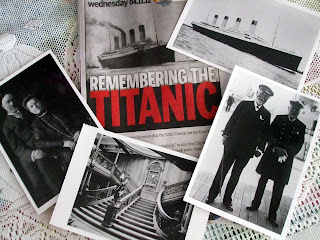 This week marks the 100th anniversary of the maiden voyage of the Titanic and the fateful sinking of a ship that was widely touted as unsinkable.  The book, Last Dinner on the Titanic shares menus and recipes that would have been served on this majestic liner.  The authors, Rick Archbold and Dana McCauley offer ideas and suggestions on how to host your own dinner party to honor this historic event.  They dedicate this book 'to the memory of all those who prepared and served the food aboard the R.M.S.Titanic'. The ship carried the most advanced culinary facilities afloat.  With three huge galleys and a staff of 80, they toiled around the clock to prepare nearly 6,000 meals a day for the passengers aboard.   French influenced fare would be majestically presented in the splendid restaurant creating a culinary drama while a hearty stew might be served in the third-class dining area. 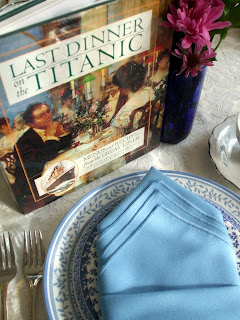 Preparations for our special event at Sweet Remembrances are underway.  Course after course, from Macedoine de fruits to Asparagus Salad with Champagne Saffron Vinaigrette to second class Coconut Sandwiches, we hope to honor those that toiled in the kitchens and respect their dedication to preparing and presenting a sumptuous repast. 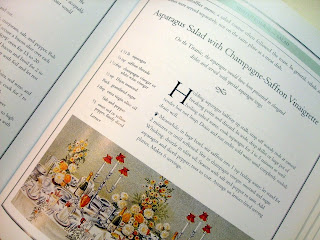 'It was a brilliant assembly, contentment and happiness prevailed.' ~First-class passenger Elmer Taylor.
at 9:34 AM

Email ThisBlogThis!Share to TwitterShare to FacebookShare to Pinterest
Labels: In the Kitchen

I hope you will come link up to Friends Sharing Tea Nancy! This is a lovely post. I think it is a sobering week in many respects!

Your dinner sounds wonderful! Wish I could come, but I live too far away.

A nice tribute to the Titanic and your own dinner coming up sounds like quite the event.

I can't wait to hear more and see pictures of what you prepare. It all sounds delightful.

How fun...you and Bernideen have done such a lovely job with this Titanic theme.

I know your Titanic event will be fabulous. I wish I lived close enough to make a reservation. I'll attend vicariously through the photos you will post.

What a lovely post! Would love to attend your special dinner but I too live too far away. Thanks for sharing.

Wonderful post! So full of information. What a great book, too! That goes on the list!
Ruth

A fitting tribute to those who embarked on that fateful voyage. Looking forward to seeing the photos from the event.