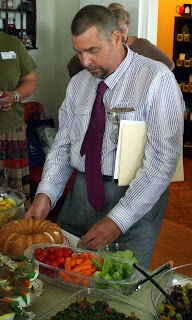 One of the newest members of MATBA, Kirk Barbour, provided a recipe for Earl Grey Sally Lunn bread along with a bit of history regarding this famous Bath Bun.  Sally Lunn is a yeast bread that was popular in England's West Country, taking its name from the Sally Lunn House in Bath, UK.  It is a mystery as to who is Sally Lunn, although some speculate that she was a French Huguenot refugee, named Solange Luyon who arrived in Bath around 1680.  Sally Lunn bread has appeared in various forms around the world, however the original resembles a French brioche.  Additional information about the Sally Lunn Bath Bun can be found on their website, here. In the 1900's, recipes for Sally Lunn even appeared in some Pennsylvania German cookbooks.  The recipe that Kirk shared is an adaptation of a recipe submitted by Nancy Roan of the Goshenhoppen Historians and was found in the second edition of the regional cookbook, Boyertown Area Cookery, published in 1991 by the Boyertown Area Historical Society, Boyertown, PA.

Preheat the oven to 375 degrees.  heat the milk until it just starts to boil, remove from heat, and infuse 1 tsp. of Earl Grey tea.  Pour the tea-infused milk into a large bowl.  Stir in the sugar, salt, butter, and another tsp of Earl Grey tea leaves.  Then add the yeast and water.  Beat the eggs and add to the other ingredients in the bowl.  Then gradually work in the flour.  Cover the bowl and allow the dough to rise for 45 minutes.  Place the dough in a bundt pan.  Bake for 30 minutes.  Slice and serve with jam, marmalade, clotted cream, or lemon curd.
at 7:00 AM

What an interesting idea to add Earl Grey to a Sally Lunn.

Next time "we" go to England, let's go to the Sally Lunn Tea Room in Bath.

I was sad I didn't get to go to the Sally Lunn Tea Room in Bath when I visited some years ago, but if I go again I will certainly visit there. I did peak in the window, but didn't get in the door. How nice to have a new member there sharing this recipe.

Thank you for sharing this!