Foods of the Lower East Side, NYC

On our recent trip to NYC we did a tour of the foods of the Lower East Side. This was meant to be a walking tour offered by the Tenement Museum but due to extreme winter temperatures it was held indoors in a conference room. The Lower East Side is an ever changing area of immigration and we traveled through 150 years of relationships between food and people. We began in 1863 when it was a predominantly German area. Our food journey started with soft pretzels served with spicy mustard. 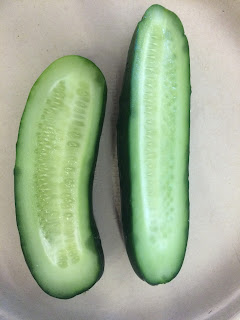 By 1898 the Lower East Side was immersed in Yiddish, Jewish culture and foods. It is said in 1898 approximately 2,000 people lived per block  (today 200 people live per block). Grab and go foods were sold on push carts on the street and pickled items were one of the favorites including these fresh young crisp pickles. As other immigrants have come to the east side the pickling shop has added new items. They now make a Caribbean pickled pineapple with hints of clove. 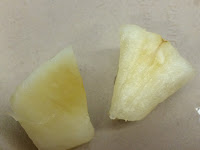 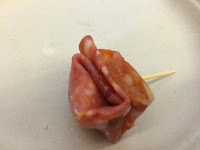 We also tasted bagels and "schmear" (a spread of cream cheese).  Bagels are certainly a food that has been picked up by the main stream. In the 1920's Italians were on the scene and Di Palo's opened up to import the old world cheeses and meats. They are still there today and with a long line of customers waiting to purchase meats, cheese and pasta salads. 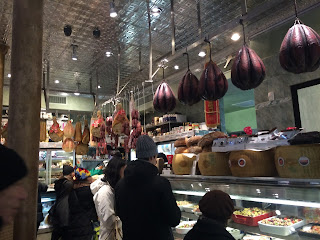 Since each region in the homeland often seasons and flavors with a unique taste, when the immigrants came to the US, a pub owner would have to create a melting pot of those flavors to please a variety of customers from a variety of regions.  It would Americanize the flavors of the old country based on the spices available here. 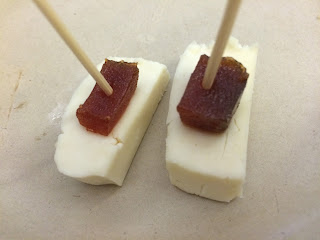 In the 1940's, along with Puerto Ricans and Dominicans, the Latino community grew on the Lower East Side leading to the introduction of Queso Blanco and fried plantains. The NYC Mayor LaGuardia banned push carts as dangerous and too old world  and too hard to tax. In the mid-1960's after the Asian Immigration Act of 1924 was lifted so an influx of Asians and Filipinos came to the Lower East Side bringing dumplings and Hong Kong bakeries. Our tour discussed the influence public schools had on the immigrant diet. For instance the schools would teach the importance of dairy to a culture that did not mix dairy and meat. 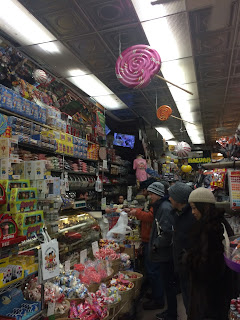 Economy Candy imports, wholesales and makes their candy.  That part of the program inspired Cedar so much so that we had to go visit! Regardless of age, we were all little kids again in a candy store. What a selection!
at 8:27 AM

Email ThisBlogThis!Share to TwitterShare to FacebookShare to Pinterest
Labels: Culinary Delights, Out and About

This is an interesting and unique way to tour NYC.

What a fun indoors tour. I would have been with Cedar at the candy store for sure.