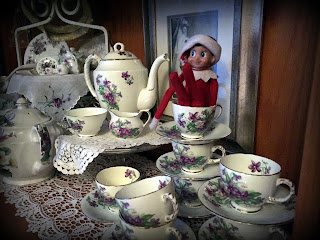 Ed, the Elf on the Shelf has arrived in the tea room along with the great nieces Arielle and Gracie, almost 10 and 8. Ed usually appears the day after Thanksgiving. According to the girls, he is mischievous and has been known to eat their leftover Halloween candy! He rolls paper towels on the couch, and sometimes hides in the paper towel roll! He watches the girls... and is known to tattle if there is any naughtiness happening. And last night he tucked himself in a tea cup - watching the girls before Santa arrives! No one can touch Ed until Christmas day and the days leading to his return to the North Pole around January 2nd, after Arielle's birthday.
at 8:53 AM

Email ThisBlogThis!Share to TwitterShare to FacebookShare to Pinterest
Labels: Christmas

This is charming! Please tell Ed and all of your family I said Merry Christmas! :)

Oh that Ed, he is a cutie! Have fun with nieces.