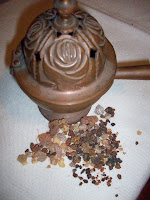 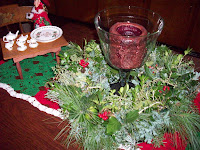 The advent wreaths we made as a class earlier in December are holding up very well. This is one has been used as a table centerpiece all season and it is still as perky and fresh looking as the day it was made.

The last herbs to discuss in our advent series are the Gift of the Kings, Frankincense and Myrrh. Frankincense (Boswellia carterli) is an exudate from the wounded bark of a tree. The milky secretion forms tear drops that are used world wide as an incense. According to the ancient law of Moses, it should be burned in a proportion of six parts to one part of myrrh, and its pleasant fragrance compliments the musky odor of myrrh. Its presentation to the Child signified recognition of His divinity. Myrrh (Conniphera myrrha) is a dark resin that exudes from the bark of a small tree of East Africa and Asia. This forms"tears" which are used in perfumes, as incense, and as a healing agent for embalming purposes. In ancient times it was valued more than gold. As a gift to the Christ Child, it signified his mortality.

Email ThisBlogThis!Share to TwitterShare to FacebookShare to Pinterest
Labels: Christmas, Herbs of the Bible

Thank you - I've always been curious about these two herbs!