A visit with the Belsnickel 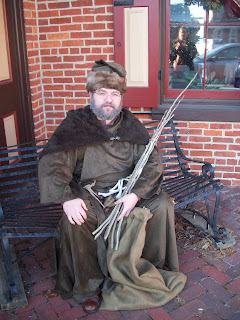 The Belsnickel is a German tradition from the 19th and early 20th century. The tradition traveled to the US with the immigrants and was generally practiced in Pennsylvania by members of the Reformed or Lutheran Churches. Usually a neighboring farmer dressed in an outlandish costume which included bells, furs and a masked or painted face. He 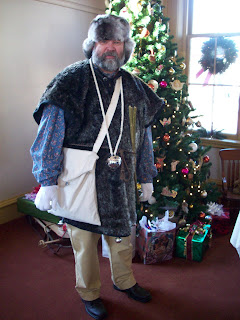 brought goodies for the well behaved children and carried whips/sticks to punish the naughty.

Costumes would vary from community to community. The Belsnickel was usually a man but could be a woman too and the visit could take place anytime between the first Sunday in December and New Years Day. Translating to "Nicholas in Fur", today's Santa Claus' fur trimmed suit originated with this tradition. Beginning in the 20th century Belsnickels often traveled in groups. 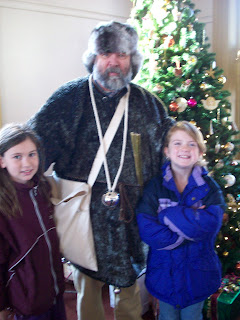 The Mechanicsburg Museum Association hosted the visit with the Belsnickel. Angelica and her good friend Sage are both on the "well-behaved list". Cedar, too!
at 7:00 AM

Email ThisBlogThis!Share to TwitterShare to FacebookShare to Pinterest
Labels: Christmas, Our Town - Mechanicsburg, Out and About

I like hearing this tradition. What a great Belsnickel costume. I am glad Angelica, Sage, and Cedar are all on the "well-behaved list". Best wishes to you and all your family.