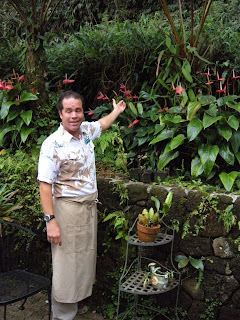 Vanilla planifolia produces one of our most common flavorings. The Vanilla Bean is a pod from a species of climbing orchid. As an epiphyte it grows on decaying matter. The ripe pods are about 6 to 10 inches long and 1/4 inch thick. Preparing vanilla for market is a long process. The pods have no aroma when harvested! After being picked, they are stored in a drying shed until they begin to shrivel. They are then placed alternately in sweat boxes then warmed in the sun. It is during this process that the volatile oil Vanillin is formed and the aroma develops. When the pods are cured, they are graded for size and quality.
It is also interesting to note that this plant can not fertilize itself! 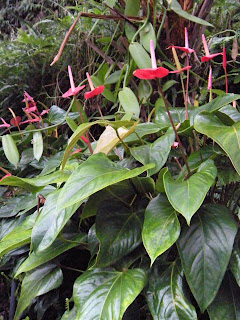 Prior to 1836, fertilization was left up to the birds, bees, and winds but then European botanists discovered they could transfer the pollen by hand. Now all cultivated species are pollinated by hand. It takes 3 years until the plant flowers, 24 hours to pollinate the flower (by hand) and 9 months until the beans are ready for harvesting. As many as two hundred racemes of flowers may be seen on a full bearing vanilla plant but commercial plantations pollinate only about 6-10 flowers. Wow! Vanilla is the second costliest spice, second to Saffron. We have a new appreciation of the price tag on Vanilla beans!
(Note: in the above photo, the Vanilla plant is growing behind the anthuriums, growing as a vine, climbing up an existing tree. You might be able to discern the slightly more slender leaves of the plant.)
at 7:00 AM

so right! can understand better why real vanilla is soooo pricey:) thanks for sharing:)

Wow - I did not know these things, either.

Looks like I won't be trying to grow that anytime soon. :)
Val

Thank you for all the interesting facts about vanilla beans. I also enjoyed seeing the photos of the anthuriums.