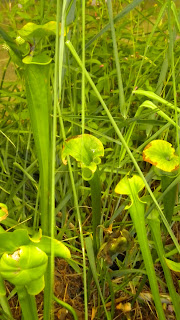 Sarracenia or sometimes called Pitcher Plants, are herbaceous perennials that grow along the coastline of the South East U.S. in bogs or swamps with an acidic type soil. This clump of Pitcher Plants was spotted at the North Carolina Aquarium on Roanoke Island. This aquarium strives to illustrate the water/coastal life of the state. Many of these bog plants have been lost to developments and several states have taken measures to protect the plants. Some of the species are listed on the USA Endangered Species Act. 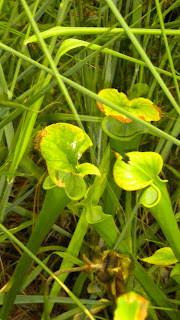 A carnivorous plant, insects are attracted to the nectar like secretion at the top of the lip. Slippery footing causes the bugs to fall inside and die. They are then digested by the plant as a nutrient source.
at 7:00 AM

They are kinda pretty. Sort of like teacups for the plant. Now I am thinking weird. Have a good week.

I used these in dried flower arrangements at the height of that boom - which has sadly passed. They were very interesting looking but I never knew your "OTHER FACTS".

I love it when you post pictures of the wild things...it helps this young student!! (SMILES).

Aren't plants amazing? They have their own slippery slide for the bugs!!

I don't think I've ever seen any of these outside the Atlanta Botanical Garden. They are lovely!