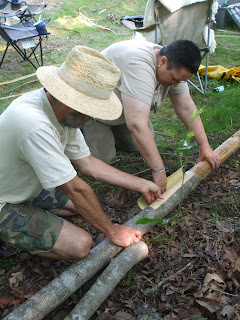 On the last day of the skills camp, Tracy and Nancy attended a session on making bark baskets.  Utilizing a branch from a Tulip Poplar tree, with some skillful cuts and guided instruction from Jeff, we removed the outer bark.  Once the original cuts were made, it was quite amazing how the bark simply peeled off.  Additional cuts in the center of the peeled bark allowed you to fold the bark in half, forming a basket.  Poking holes along the sides and weaving them together, helped to form the basket.  Additional weaving along the upper rim to support the edge completed the basket. 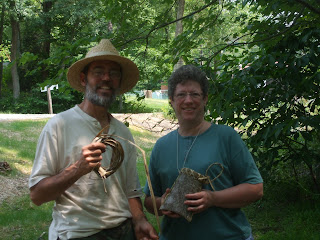 The sense of accomplishment upon completion of this craft was quite satisfying.  Selecting sessions that resulted in a completed project was important to me. 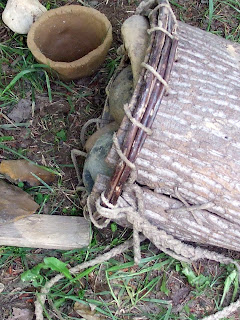 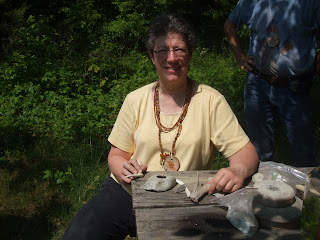 And the other primitive skill that I learned, was how to carve soapstone using flint and antler pieces to create a vessel to burn the cordage that Susanna learned to make using the yucca plant.  A lot of scraping and digging and a few blisters later, there was a spot hollowed out that was large enough to hold the oil and the wick.  Fun!
at 7:00 AM

What fascinating fun you have had!! Thanks for sharing...I am sure the kids will remember this vacation for a long time!! I hope you got to have air conditioning at night and weren't living too primitively that way! (smiles). ~Donna