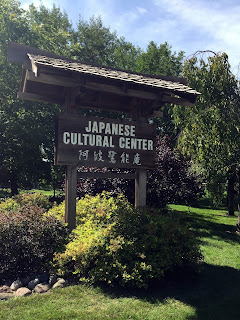 A journey to Saginaw, MI took us to the Japanese Cultural Center where the long term friendship between Tokushima city in Japan and the citizens of Saginaw in Michigan is recognized. These sister-cities established a relationship in 1961, and over the years a Friendship Garden and a Tea House have been built on the grounds here, considered both American and Japanese soil. 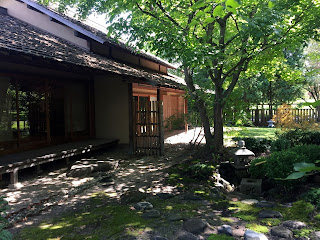 There is a quiet serenity and tranquil beauty to be found here as you stroll the three acre garden. Cherry trees, peaceful pathways, stone lanterns, beautiful vistas, and one of the most authentic tea houses in North America. 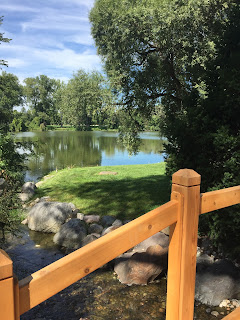 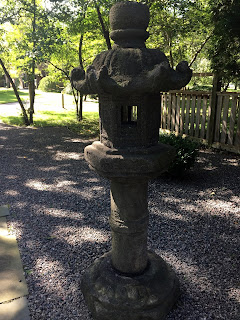 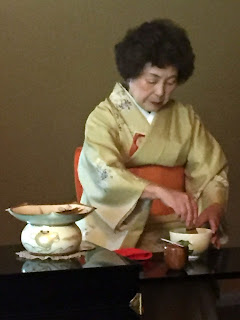 Working with the mission to promote intercultural understanding and peace through a bowl of tea, we were able to observe a Japanese Tea Ceremony. This ceremony was not the customary ceremony performed on your knees, but rather an adapted ceremony where the hostess was seated at a table. This style has been used for the comfort of American attendees, and for the ease of the aging hostess. The traditional kimono was wore by the presenters. And the matcha tea was prepared with precision and attention to detail using specific utensils for each step and guided by four principles. In our brief introduction to the Way of Tea (Chado), we learned that these four basic principles include harmony, respect, purity, and tranquility. 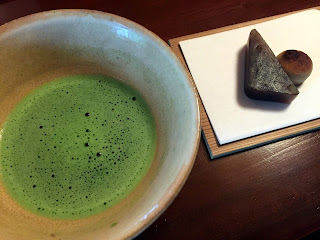 Once the tea ceremony demonstration was completed, we were each served two sweets, yokan, a jellied sweet made with red kidney bean paste and the round one, kuri shigure made with chestnut powder. After eating the sweets, we were served a bowl of whisked matcha, and invited to ask any questions. 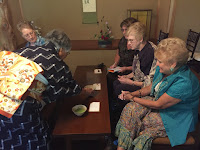 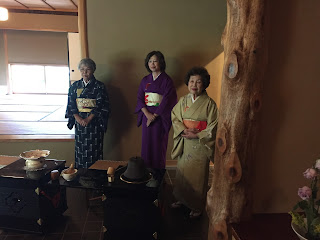 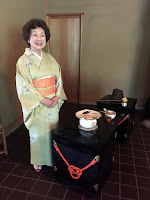 Excellent post and photos of the Japanese Cultural Center and Tea Ceremony. I'm so glad it was a part of the tea tour because it was very educational for me since I knew little about Japanese tea rituals.

I hope readers of my blog will visit your post for the greater details you've included about the tea ceremony. My blogging friend Tomoko who lives in Japan left a nice comment about her experience with learning to serve tea.

This is a very nice post about our Japanese tea experience.

What a wonderful experience.

I love your photos and information on this stop. It was a wonderful experience.
Sips and Smiles,
Teresa