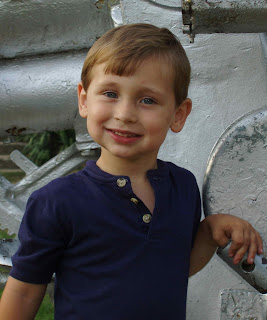 This cute little guy has become a finicky eater of sorts. He knows what he wants, and that's that. If we suggest otherwise, it's a lost cause, and he eats nothing. Tonight for dinner, he was interested enough to sample the corn fritters I made - because 'I've never eaten a corn pancake', says he. In addition, we had chicken which I dotted lightly with butter, sprinkled with dried onion, paprika, parsley, and garlic and baked it in a 350 degree oven for 45 minutes. Tonight, Cedar specifically requested some of the chicken, and then proceeded to request an additional piece of the chicken 'with the plants on it'. You just never know when they will eat the plants and when they will not. When his older brother was younger, he announced that he doesn't like herbs as he's simultaneously eating a portion of mashed potatoes seasoned with fresh chives.
at 6:21 PM

What a cutie! I am sure he will have a great palate before long. He certainly has a big advantage learning how to use and enjoy herbs.

Kids! Ya gotta love 'em. He's growing up so fast!