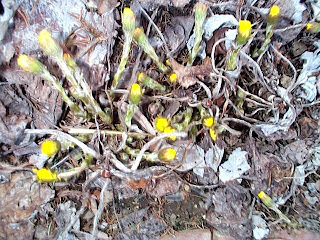 Coltsfoot, Tussilago farfara, is one of those unique plants that sends out the flowers first and then the leaves. The flowers are popping up out of the ground now and look similar to dandelion flowers. The leaves in this photo are last years leaves yet to be raked off. Coltsfoot has historically been used as a cough suppressant and for other lung ailments. Originally from Europe/Asia it is now a common roadside weed here in the US and in some states it's considered an invasive species. 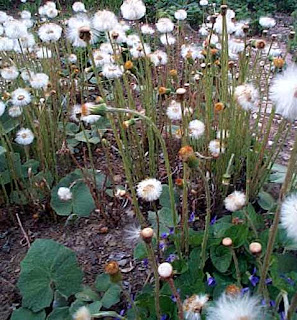 The seed heads resemble dandelion as well which contributes to its invasiveness. 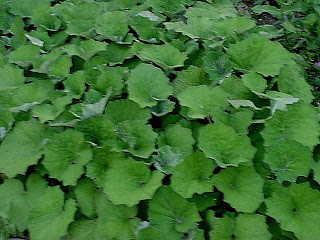 The leaves of coltsfoot (doesn't it look like a colt's hoof?) are what is used medicinally and is often used in herbal smoking mixtures as well. Tomorrow we will look at a cousin of coltsfoot.
at 7:00 AM

Email ThisBlogThis!Share to TwitterShare to FacebookShare to Pinterest
Labels: Herbal Advantage, In the Garden

great pictures! i especially like the one with it in seed head mode. good info on a good plant. coincidentally, i bought this herb for the first time last month, and so have been researching it to learn thoroughly before i use. i is on my list to look for this spring in the "wild". i appreciate your posting this. one of the things that inspired this little quest (besides the fact i have been self teaching myself herb for a few years now)was the fact over the years, coltsfoot has been a very popular folk remedy for coughs and bronchial congestion. The leaves, the blossoms, and even the roots are ingredients in a large number of proprietary tea mixtures that are marketed in Europe for treating these conditions. anyway, i appreciate and learn from these posts! hugs :)