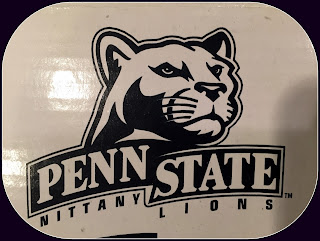 ...Penn State! That's the rally cry heard around the state, particularly this week as the Penn State football team is in California, ready to play against USC in the Rose Bowl today. All TV stations will be tuned to this exciting game as Penn State celebrates the end of a comeback season under the expert guidance of coach James Franklin. 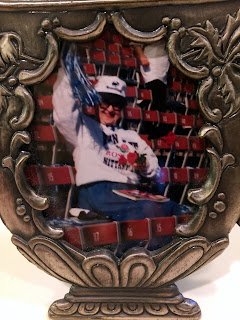 Stepping back in time to 1995, 23 years ago to be exact, Penn State played in the Rose Bowl beating out the Oregon Ducks. Through a family friend, we were able to secure tickets to the Rose Bowl game that year and sent our parents out to LA as a surprise Christmas gift. They visited with mom's sister, toured the behind the scenes of the making of the Rose Bowl parade floats, and attended the Big Game. Mom, shown here in her blue and white Penn State proud outfit, was a good sport and attended the game with Dad, knowing full well he would have much rather watched the game with his best buddy, Max.

Then I will join you in pulling for Penn State! Good luck, and Happy New Year!

I forgot to check the score! Sooooo close!