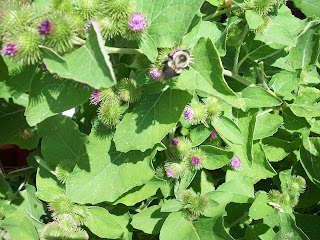 This hearty weed is growing out in the back alley. It is such a pretty plant and people often ask what it is. There are many kinds of "Dock" named weeds, this one got its name Burdock from those burr like flowers that reach out and grab hold of your clothing or animal fur as you brush by it. Many people remember playing with the burrs and making doll chairs and other creations with them. The original Lego perhaps? In the early 1940's a Swiss inventor studied the hook and loop system used by the seeds to attach to his dog's fur and that was his inspiration for the invention of velcro. 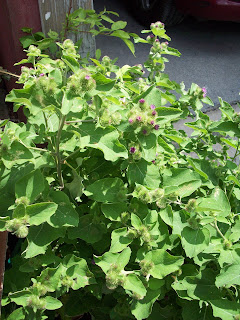 Articum lappa, a biennial (two year plant), can grow quite tall up to 4 or 5 feet with a sizable tap root to hold it in place. In Asia, the tap root is eaten as a root vegetable. 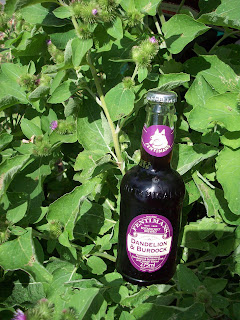 In the United Kingdom, it is sold as a soft drink. Medicinally, the seeds of this plant are used for excessively dry skin and the root serves as a mild diuretic.
at 4:00 PM

Email ThisBlogThis!Share to TwitterShare to FacebookShare to Pinterest
Labels: Herbal Home Medicine Chest, In the Garden

oooo! I'd love to try that soda!

I always learn so much on this blog! Now if I could only remember it all!!!

In my past I believe I used Burdock for dying yarn. What plants do you have in your garden for creating colorful dyes?