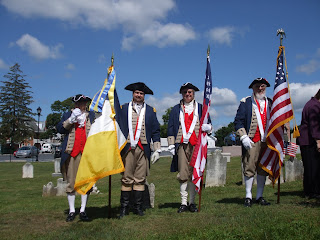 When Private Reppert left the army, he settled back into the Oley Valley. He was married to Margaretha (Schneider) and had ten children. 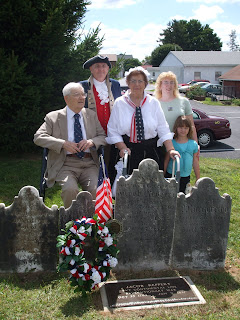 This special dedication ceremony was organized and coordinated by our cousin, Bruce Reppert. Many members of the Reppert family were in attendance to recognize the contribution our ancestor made to the freedoms of this country. Not only a ceremony to honor Jacob Reppert, this ceremony was a tribute to all military personnel that have served and are serving our country; for which we are thankful. 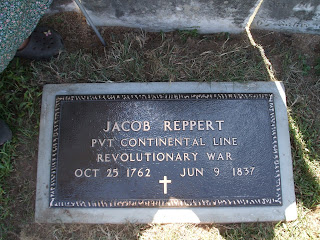 For additional information regarding this dedication, please read the article that appeared in The Reading Eagle.

What a very special event for your entire family! As a member of the DAR, I understand and appreciate the importance of this recognition of your Patriot ancestor.

A fitting tribute to Private Reppert. How wonderful to have this kind of information about your family history. Linda, I am a DAR "wanna-be" ... my Irish ancestor, Shadrach Deen (my maiden name is Dean), came to America (Georgia) and fought in the Revolution, but obtaining the necessary paperwork to back that up has been difficult. Hopefully, one day ....

How nice to know your real family history, so much more than just knowing names and dates.

I find it so wonderful that you have this history of your family. It is really special! Congratulations!

My 4th great grandfather served in the same unit. Have a copy of his discharge papers signed by Washington. On the back are names of 6 soldiers that excourted Washington back to Mt. Vernon. Jacob Ruppert was one of names on the back. If you would like copy email me at dredddx66@tampabay.rr.com