What fun we had! The wagons would pull out of the campsite on the command Wagons Roll! 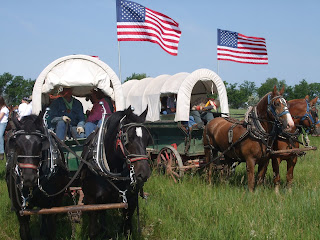 One morning, we had to ford a small river; wagons, horses, and walkers. It was pretty thrilling to see the horses and wagons cross the river and yet, I can't even begin to imagine crossing the Mississippi with a Wagon Train, or even the Rockies for that matter. 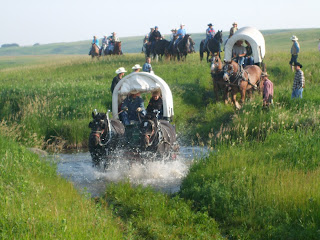 At lunch, and again at the end of a long day, 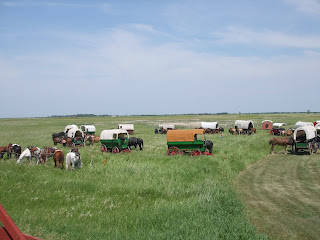 the wagons would circle the campsite. It seemed a normal routine, but impressive to observe as the teamsters commanded their steed to circle round. 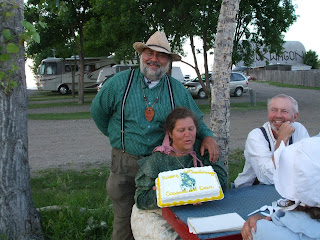 The Tenth Anniversary was duly noted on the Fourth of July. Through a secret connection to the outside world, we were able to procure an anniversary cake, complete with draft horse design, to make note of this celebratory occasion. A night of Fireworks culminated the festivities. 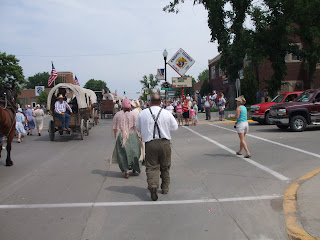 And on our final day, we celebrated the 125th Anniversary of Jamestown, ND as we became part of their parade. The spectators were happy to see us, asking us where we were from, and if we enjoyed the experience. While carrying a very small PA flag, I was surprised there were a few that recognized the design, commenting 'they're from PA'. It was with great pride and a sense of accomplishment that we walked that parade route. We did it. And survived.
at 7:00 AM

Wow! What an experience of a lifetime.

An amazing journey!!! I have enjoyed reading all about it.

Thanks for all the great pictures! I've enjoyed your vacation very much, and didn't even need to get blisters, saddle sores or wagon butt.