On Wednesday we reached Round Top, the highest point in North Dakota. We camped at the base of this 'hill' and were able to easily walk to the top, which was loaded with gopher holes; it was a veritable housing facility for these little critters. Since we ended the day early, the afternoon was spent relaxing and playing games. It provided an excellent opportunity for all the kids on the Wagon Train to get to know each other, and to expend some energy. There was leap frog for the youngest, 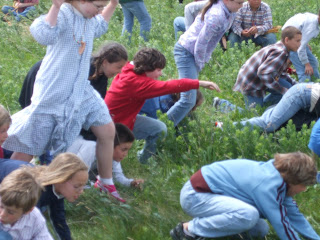 and potato sack races for the next age groups. 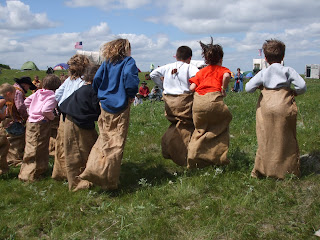 There was even a three legged race that included a parent and child. 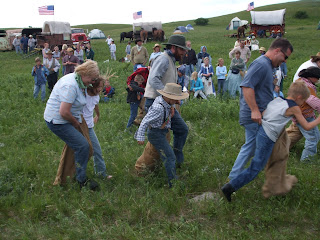 Everyone was happy to hop along the Prairie, accepting the challenge. Tug of War was the exciting end to the days activities, pitting men against women, with the men winning both attempts, alas.

A special memory of mine was watching the children play 'hide and go seek' in the prairie grass! When I saw how quickly a piece of luggage disappeared from view in the grass, I realized that children could do the same...To demonstrate how this could happen, Davis walked off into the prairie while six of his friends turned their backs and counted to twenty. Sure enough, when he sat down in the grass, there was not a trace! You would be surprised at how close you need to be to find a young person in the grass.

I understand that pioneer children were lost in the prairie and I can see how it could happen.