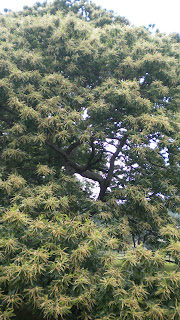 in its original native area. Many of these majestic trees were lost to a fungus introduced to the US about 100 years ago. It is very difficult to identify the American Chestnut Trees from other varieties of chestnut, so we are not positive this is an American Chestnut. But it was just so majestic we couldn't resist snapping its photo. 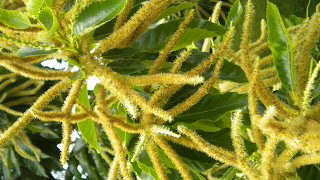 Considered a favorite nut for roasting and for turkey stuffing, it looks similar to and is often confused with the horse chestnut and buckeyes. However, it is a different nut distinguishable by a small point on the end.
at 7:00 AM

My, that IS a beautiful tree! My husband has been telling me I need to download this app where you take a picture of a tree and it tells you what the tree is, etc. Wish I had it right now!