Two of our three garden cats appeared in the gazebo one summer day a few years ago, with only a tail showing from under the tablecloth to give away their hiding place. Young kittens at the time, perhaps 6 weeks old, left to fend for themselves in the safety of a herb garden. Their mother passed through the area to check on them periodically, but they were on their own to be discovered one day. Immediately given names, they have found a loving supportive home. Gypsy 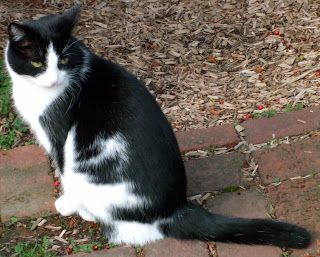 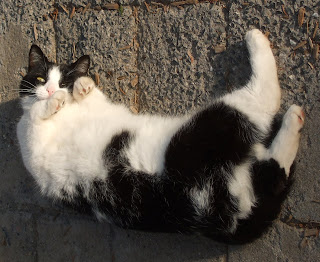 and a moment to be cute. Her brother, Friskie, shown here with his nose buried in the early spring catnip 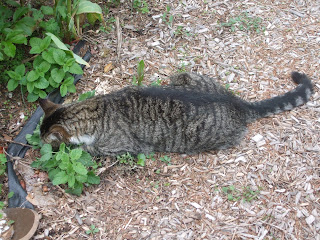 peers up in his catnip haze. 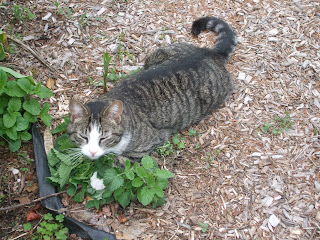 He's always been the friendliest of the three, willing to be picked up, snuggled and petted as we desire. Miss Scarlet Skittish Cat 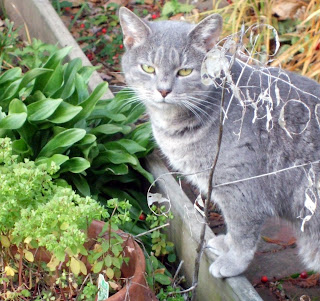 followed one of them home one day when she was just a few months old, decided this was pretty good living, and hasn't left the area since. She has adapted to her new home, even becoming less skittish as the months pass by, but still leery and fearful of the unknown. 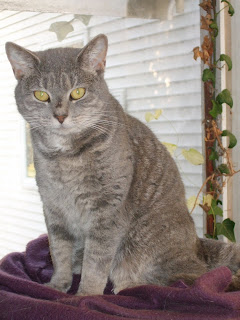 All three live in the greenhouse during the winter months, snuggled one atop the other for added warmth. Fortunately, a program called SNAP (Spay Neuter Assistance Program) is available in our area and helped us limit the population growth of the garden cats. We're happy to provide certain comforts for these cats, but extra happy to know they will not add to the population of feral cats in our community (the mother included).
at 10:47 AM

Gypsy, Friskie and Miss Scarlett are all adorable! I love kitty cats. I'm so glad these three found kind hearted people and a happy home in your herb garden and green house.