History of the Bee Skep

Egyptians were keeping bees as early as 4,000 years ago. Colonies of bees were floated up and down the Nile on barges. An integral part of British economy, the main product of British and Tudor apiarists was the wax, used to make candles. The name skep, introduced in the 16th century is generally regarded to have been derived from the Norse word skeppa meaning a container and measure for grain equal to half a bushel. 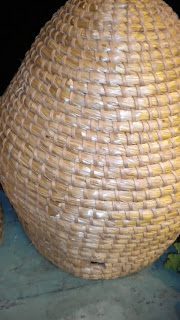 Keeping a skep of bees dry was an important part of bee keeping. A bee bole or three sided shelter is the best protection. In the 17th century, German immigrants that settled in America brought with them their bee skeps and knowledge of skep making. Rye straw was used as coiling material and hickory, ash and white oak splints were used to bind the straw together. Over the centuries the domed shape of the common bee skep has changed little. These bee skeps are no longer used for hiving today since you need to destroy the hive to get the honey. In 1871 Lorenzo Longstroth introduced the beehive that revolutionized bee keeping throughout the world: the wooden beehive with removable super. Although the modern beehive is the greatest blessing, 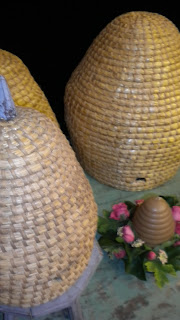 it's the straw skep that continues to symbolize the world of bees.

Many many thanks to Lisa Head, an extraordinarily talented basket maker and bee skep maker. These photos are of her very tightly coiled bee skeps and she also shared the history of the bee skep. Please visit Lisa's website, here.
at 7:00 AM

I just love the way they look. How smart were those Egyptians, with their mobile bees. I'm really glad that there is a resurgence in beekeeping, with all the awful things facing little honeybees these days.

Loved reading about the bee skeps. We use to have a straw one in our garden, but it finally fell apart. Lisa's are gorgeous.

Fascinating! I have a bee-loving friend who has several skeps, and I had wondered about that word. The things I learn from my blog friends!